An extraordinary and inspiring story of courage and endurance.

Clare Sultmann is an inspirational and motivational individual who faced adversity and overcame it. Her story demonstrates how an event of immense devastation can result in unshakable determination.

Washing her face whilst preparing for her routine 10km jog in Bondi Beach, Sydney, Clare stares at herself in the mirror for a few seconds than normal, without the realisation that those where the seconds that would change her life as she knew it. She steps out into the crisp air, facing the world head on and feeling as though her life is going exactly as she plans.

As Clare begins to cross at the pedestrian crossing, mere metres from her home, she looks both ways and begins her journey. She doesn’t see the garbage truck rounding the corner, nor does the driver see her. Attempting to get out of the vehicles way, Clare throws herself backwards, but screams in agony and watches as the truck runs over and traps her legs under the front left wheel.

The next agonising thirty-four minutes are spent trapped under its weight as she begs for her legs to be saved.

Sultmann was released from the weight of the truck and rushed to the closest hospital. Having lost so much skin, muscle and blood, by the time she reaches the hospital she is suffering from hypothermia and her legs are in the worst physical condition doctors have seen with injuries that are life threatening. If Clare survives she faces the reality that she may never walk again or possibly lose both of her legs.

Clare spent the next six months in hospital fighting to not only keep her legs but with the goal to walk again on her own two feet. Her strength and determination to do so was overwhelming, as the obstacles she faced were mammoth and unwavering.

After six months spent in a sheltered hospital room, Sultmann is allowed to go home but relied heavily on crutches and faces living her life with a permanent disability. Her anger and despair are paralysing, but her mother reminds her that ‘It’s not the accident that will define you, but what you do with it and where you go’.

Determined to make a life for her-self and after rehabilitation and thirty-seven operations, Clare used her strength and the support of loved ones to continue life as she normally would.

She completes her Masters of Law Degree at the University of Sydney and begins part-time work in the legal area, all whilst undergoing rehabilitation.

In April 2006, Clare begins to work with a new charity Youngcare. Through the charity, she meets a man who changes her life and supports her to become a Barrister-at-Law. She eventually marries this man and has a son with him.

Clare has written a book based on her experience titled ‘Standing on my own Two Feet’, which is her account of the trauma she experienced and how she overcame the challenges and obstacles.

Her courage, determination and strength are unwavering and prevalent in her presentations, ensuring that Clare Sultmann’s story moves any audience. She emphasises how important resilience and setting goals are in overcoming obstacles, no matter how difficult they may seem. 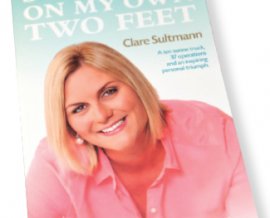