It was in 2018, that Carla was seriously injured when she was questioning a man over a stolen mobility scooter when he set his large American Pit Bull onto her.  During the critical incident she put herself in harm’s way as she ran directly at the dog to stop her partners from getting attacked.

Carla Duncan is a passionate speaker on the topics of resilience, inspiration, and following your passion. With an incredibly remarkable and diverse background, Carla demonstrates true bravery in her career and personal life and encourages audiences to do the same.

While working as a General Duties Police Officer, Carla was awarded the Australian Federal polices Commissioners Bravery medal the highest award given for Officers who put themselves in harm way for the protection of others.  It was in 2018, that Carla was seriously injured when she was questioning a man over a stolen mobility scooter when he set his large American Pit Bull onto her.  During the critical incident she put herself in harm’s way as she ran directly at the dog to stop her partners from getting attacked.

For Carla protecting her colleges was not something out of the ordinary to her. Having been diagnosed with PTSD and going through trauma counselling after protecting her Mother from the abuse of her Father, Carla consequently spent most of her childhood in survival mode.

The pattern of abuse did reach into some of Carla’s adulthood where she too was a victim of Domestic Violence.  However through resilience and a strong drive to not allow this cycle to continue, she sought help through professionals and friends. She began studying a University Degree in Criminology and Psychology in order to empower herself with knowledge, building her self-esteem and resilience to chase the career of her dreams in the AFP.

Coming from such a testing upbringing Carla always felt she may not “fit the mould” of such a respected career path. However due to her resilience and drive to be a better version of herself, she overcome significant trauma by facing adversity head on, using the battles she faced when younger as a strength to help others. She now speaks to Police recruits and in the Corporate sphere on a multifaceted range of topics, including building resilience, Domestic Violence, mental health stigma, PTSD, self-esteem and learning to embrace your vulnerability and recognising your accountability to chase your dreams.  She gives people inspiration, tools, and the motivation to hold themselves accountable for their own recovery and how to seek help when needed.

Still in the Police Force currently, Carla is now returning to post Graduate study, having uncovered a passion for exposure therapy with Police who are returning after trauma, as well as the overall welfare support for Police, Government and Private sectors employees.  With her experience being role model for troubled Youth, she also has a passion in speaking with Youth on a variety of topics to guide them onto positive paths and learning why it’s so important to surround themselves with positive people.

Most importantly her take home message for all Youth and adults is that you do not have to fit any mould, and if you put your mind to anything you really can achieve anything. 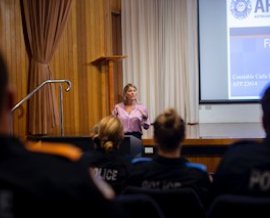