Motivate and inspire your audience to reach new heights!

Ben Roberts-Smith holds an incredible story with courage and spirit that is an inspiration to all. He is a rare recipient of the Victoria Cross.

Holding a remarkable list of combat operations, Ben has completed two tours of East Timor including Interfet, Fiji, Iraq and six tours of duty in Afghanistan.

During his second operation tour of Afghanistan, Ben was recognised for his brave actions as a patrol sniper in the Chora Valley and received the 'Medal for Gallantry'. In his fifth tour of Afghanistan, after acting courageously by drawing fire away from his team and silencing armed enemys, Ben became a part of the 'Victoria Coss' action.

By holding these awards, Ben is the most decorated serving soldier in the Commonwealth, making him a motivational and inspiration role model for those aiming for success.

His time with the SAS including deployment around the world, using skills in Special Operations. Ben was recognised for his ability to engage in and maintain strong relationships with national and international stakeholders.

Ben has acted as a commander and key planner for Special Operations missions,

As a speaker, Ben shares his insights into procedures and protocols which are paramount to success. Ben aims to inspire teams to succeed as well as provide strategies that can be implemented in any competitive environment.

Using real life examples, he stresses the importance of safety to success and demonstrates how to make motivations stronger.

Inspiring and motivational, Ben Roberts-Smith is a talented speaker who engages with his audiences and sticks to a clear take away message. He is one of Australia's proven leaders and has a natural ability to speak at any event.

For further information regarding Ben Roberts-Smith please feel free to contact one of our consultants on 1300 661 904 or info@keynote.net.au and we will be glad to handle your enquiry or visit our motivational speakers page for further ideas. 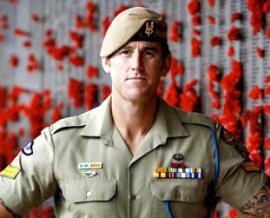