In 1993, after one year of training, Andrew was appointed as a member of NASA's Astronaut Corps and qualified as a Mission Specialist for an assignment on the Space Shuttle flight crews.

Two years later, he was named Payload Commander for STS-77, which led him to make his first space flight aboard the Space Shuttle Endeavour in 1996. Thomas was officially titled as Australia's first astronaut to enter outer space.

Andrew then undertook long duration flight training at the Yuri Gagarin Cosmonaut Training Center in Russia. He went on to serve 130 days as Board Engineer 2 onboard the Russian Space Station Mir in 1998, lauching on STS-89 and returning on STS-91/

His third space flight, aboard STS-102, saw his time in space increase to over 177 days.

Andrew has served as Deputy Chief of NASA's Astronaut Office.

With an incredible and motiavtional life story, Andrew Thomas has fascinating stories to tell and his determiantion to reach the stars never wavered until he actually did. 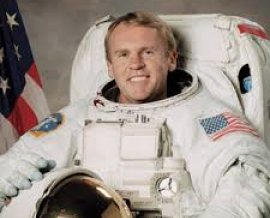