Allana's story is truly a harrowing tale of guts, inspiration and hope, she never gave up!

Allana Corbin has experienced more in her life and has overcome challenges that some of us could never dream of. Her resilience and determination is motivational and her story moves audiences to look at their own lives and appreciate them.

In 1988, Allana’s passion for aviation began to develop. She started fixed-wing training and skydiving, and was hired by Balloon Aloft to work as ground crew and in tourism marketing.

On the 22nd of December 1990, Allana was one of the crew members aboard the Cessna 210 plane, dispatched for a search and rescue mission to locate a missing aircraft. Unfortunately, the plane suffered engine failure and crashed into dense bushland, killing four passengers.

Corbin was trapped amongst the debris, unable to move her legs and was terrified for her survival. She began reminiscing and realised that the material goods that she had collected throughout her life did not matter, but the people in her life were the most important factor.

Luckily, she survived, but doctors warned her she would never walk again, and sent a social worker to help Allana treat her ‘denial’ as she could not accept the diagnosis. Her determination to not be considered a paraplegic was commendable and after painful rehabilitation, and twelve months after the crash, she rose from her wheelchair.

The doctors also warned Corbin that she would not be able to pilot an aircraft anymore, but her resilience outshone their words. After realising that her fear of flying due to the crash was holding her back, she began to fly helicopters to overcome the angst.

Her recovery is often described as miraculous. Not only did she relearn how to walk, but in 1995 she gained her helicopter licence and two years later she became the first woman to circumnavigate Australia solo in a helicopter.

In 1998, Allana released her autobiography titled ‘The Best I Can Be’ and four years later released her second book titled ‘Prisoners of the East’.

Nowadays, Allana Corbin enjoys speaking publicly as well as working with several charities. She is the Ambassador for the Ability Australia Foundation and is the Public Relations Manager and a Line Piolet for Rotor-Lift. She engages confidently with her audiences and speaks passionately about her life experiences. She can assist in raising levels of determination and resilience whilst motivating every individual in the audience to overcome any obstacle they may encounter. 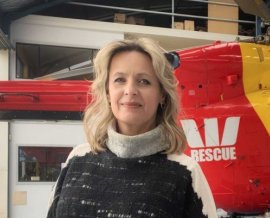