The cornerstone of Allan's work is the trust built up through strong relationships across agencies and communities.

Through that trust a strong reputation has been established where the projects and events worked upon have a built a level of resilience and continual improvement.

The theme of all these events is a willingness of all involved to work together to get the best outcome.

Examples of this are:

Transformed from Alcohol fueled violence to a family friendly event where large crowds have become the main risk due to the popularity of the event.  Through the relationships and resilience of the event, Ticketing of the main foreshore viewing platforms at Bradfield Park, Mary Booth Reserve, Blues Point and Quirrabee Park was achieved for the first time in 2019 resulting in one of the safest well run events in years.

Working with all agencies and Non for profits in the Northern Suburbs of Sydney since 2013 Allan has worked with, chaired and led strategies where all agencies work together to provide support and housing to people who are homeless or at risk of homelessness.  Such is the power and good will of this network, 100's of people have been housed  over the years who were homeless and receive the ongoing support that is part of the Housing First model in Homelessness.

Allan has currency as a Counter Terrorism trained Police Forward Commander.  Using those skills and the Command Lessons experienced in Lindt and the Mosman Collar Bomb job Allan has facilitated and led 5 major exercises in the last since October 2018 involving stakeholders across government and private industry including all levels of Emergency Services including Health, the Transport Sector and major shopping centers  such as Westfields and Chatswood Chase.

These exercises are all about learning each others capabilities, placing people under pressure in a learning environment, and practicing what may come to pass in today's world.

Allan has developed strategies to manage the health of himself and those around him in the major jobs listed, and uses those skills to maximise the support of staff he leads and works with.  This includes giving evidence at the Lindt Cafe Inquest and briefings in major jobs such as the Collar Bomb and the Lindt Cafe, using those experiences to support staff and provide them with the best chance of coming out healthy after those jobs are over.

The Commissioners Award for the Perpetual Advancement of Women in Policing.

Allan has spent considerable time working with Indigenous Communities.  His first Command was Moree.  There he worked with The Graniators in Moree, The Moree Mens Group, The Boggabilla community and the Toomelah Community.

Allan was shown the Moree Community from an original Freedom Ride member and given an understanding of the history what has been and what is.  Upon coming to Sydney continued to work with Indigenous communities seeking scholarships in schools.

Allan was asked to relieve as Commander at Redfern Local Area Command by Supt Luke Fruedenstein in 2014.  Was welcomed into the Clean Slate without Prejudice Program and through what he learnt there, had his first charity boxing match in NSWPF Legacy Boxing.

Using the relationships in the Indigenous Communities went on to use these links to benefit rough sleepers from the indigenous communities linking them with culturally aware support workers to get them housing with support services when working with the Homeless Assertive Outreach Team (HART) an initiative that saw all agencies and NGOs work together for one outcome - Housing First.

Allan has run Leadership Development Workshops in the New South Wales Police Force  every year, since 2003 targeting those staff who have that spark to make a difference in the commands they work in and the communities they serve.

·Tasmania Police Commanders at their Hobart Academy in 2019, sharing the morning with New Zealand Police from the Christchurch Shootings.

Allan retired from operational duty as a Police Commander in the NSWPF after 40 years of service on 24 March 2020. 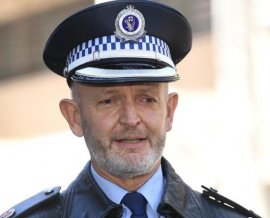