Renowned for his innovation, leadership philosophies and ability to lead change.

Highly regarded as one of the best coaches in AFL, Alastair Clarkson has guided Hawthorn through multiple triumphs indicating his strong leadership skills and innovative ideas, revolutionising the way the game is played. He utilises his past experience in Education, Business and Sports Science to transcend ideas and apply them to everyday opportunities, creating a strong reputation for himself in the sporting industry.

In 2005, Alastair assumed the position of coach for Hawthorn and focussed on creating a change to help lead Hawthorn to victory. He was forced to make several difficult decisions in order to better the team including culling several experienced players and employing young talent. In 2008, his dedication and tough choices paid off, when Hawthorn rose to victory in the Premiership. Hawthorn is now associated with victory in the Premierships, winning three consecutive titles in 2013, 2014 and 2015.

Clarkson now holds the second position on Hawthorn’s All-Time Number of Games Coached list, coaching 221 games, to which he is only surpassed by John Kennedy Sr who has coached 299 games.

In 2014, Clarkson was given the honour of coaching the Australian AFL team who played against Ireland in the International Football League. It is considered one of his career highlights and allowed him to lead some of the very best players in Australia.

His own playing career is considered understated in comparison to his coaching career. In 1987, Alastair was recruited from Kaniva by the North Melbourne Football Club, making his Victorian Football League debut by kicking the winning goal after the siren, a successful beginning to the 91 games he would play for the Kangaroos. In 1996, he left the Kangaroos, continuing his career by playing a further 41 games with the Melbourne Football Club.

Alastair Clarkson is a passionate individual whose love for football enabled him to devote his life to the sport as not only a fantastic player but a victorious coach. His presentations are filled with comparisons to football and showcase his ability to innovate and lead individuals to success. 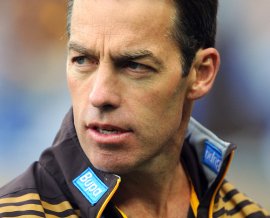