Adam Goodes is an AFL champion, Indigenous role model and community focused leader. He holds an elite place in AFL/VFL history as a dual Brownlow Medallist, dual premiership player, four-time All-Australian and member of the Indigenous Team of the Century and has represented Australia in the International Rules Series.

Adam was drafted to the Sydney Swans Football Club from North Ballarat U18 at No 43 in the 1997 National Draft. Debuting in 1999, he completed his first season of AFL winning the 1999 Rising Star medal. Adam’s breakthrough season in 2003 culminated with him sharing the AFL’s highest honour, the Brownlow Medal alongside Nathan Buckley and Mark Ricciuto.   He enjoyed All Australian selection honours and won the Swans Best and Fairest that year.

In 2005, he played an instrumental role in the Swan’s first premiership win as a Sydney based side. An outstanding 2006 season concluded with Adam winning his second Brownlow Medal, the Swans Best and Fairest award and All Australian selection. Adam was named co-captain of the Sydney Swans at the beginning of the 2009 season, recognising his status and respect within the club. Reaching his 300th game in 2011, another stellar season resulted in All Australian selection and a third Swans Best & Fairest.

Sydney reached the 2012 AFL Grand Final against the odds. After an explosive start to the game, Adam tore a ligament in his knee in the second quarter, but incredibly played on without painkilling injections and contributed to the Swans victory with an instrumental goal in the final quarter to take the lead.

He is extremely difficult for opposing teams to match up, with surprising speed, agility and endurance for a man of his size, coupled with wonderful skills and desire for the contest. One of the most durable players in the AFL, he holds the Swans games record and at 34 years of age, shows no signs of slowing down just yet.

At the end of 2009, Adam set up The Goodes-O’Loughlin Foundation (GO Foundation) with fellow indigenous AFL Star and teammate Michael O’Loughlin. The Foundation exists to enable a brighter future for Indigenous Australians by providing a conduit for philanthropic intent to corporations, organisations, families and individuals.  The GO Foundation remains steadfast in its commitment to be the vital link between these groups.

Adam strongly supports the elimination of discrimination in society, which was prominently highlighted during a match in 2013, where a member of the crowd racially vilified Adam. The exemplary manner in which Adam twisted the regrettable incident into a positive public message of non-tolerance and education, served to display his fine leadership qualities and enhance his reputation as an ornament of the game.

On Australia Day 2014, Adam was awarded the distinguished honour of being named Australian of the Year, in recognition of his invaluable work with indigenous sport and community programs as well as advocacy in the fight against racism.

Off the football field, Adam is a corporate ambassador for many leading brands including Toyota, Telstra, Qantas, Cadbury, Powerade and Puma. He enjoys playing golf, and spending time with his family and friends. 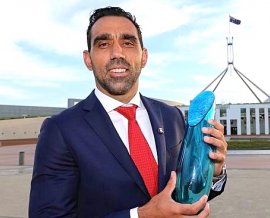