A Cross-cultural Consultant, Tasneem has recently been appointed as an ‘Anti-Racism Champion’ by the Australian Human Rights Commission. Previously, she was one of ‘50 Women you Need to Know’ in 2017’s Herald Sun International Women’s Day count, following a listing in Latte Magazine’s ‘2016 – Women to Watch’.  In previous years she has been listed in The Age Magazine’s Top 100 most influential ‘Movers and Shakers in Melbourne’ and The Australian Magazine’s Leader series, of ‘’Top Ten Thinkers’.

Through her consultancy, she speaks across the private and public sectors to issues of leadership, diversity, cultural competence, and intersectional discrimination.

When not delivering keynotes, workshops or emceeing events, Tasneem is a Board Director for Ambulance Victoria, The Australian Centre for the Moving Image (ACMI), NOW Australia and Chair of the Australian Muslim Women’s Centre for Human Rights.  She is also an outgoing Director for the Luke Batty Foundation and Chair of Lentil As Anything as well as former Curator at both the Immigration Museum and Islamic Museum of Australia.

A TEDxMelbourne presenter (Don’t Believe the Hype: Exceed it) and writer, Tasneem’s latest paper was the Griffith Law Journal’s, ‘Burqas, Bombs and Bogeymen’ highlighting media bias against Australian Muslims.  She has a background in psychology and sociology and a Masters in International Development from La Trobe University, where she is also a Golden Key alumnist.

Tasneem has appeared in numerous editorial outlets, including The Guardian, The Age and The Australian and is a regular contributor to SBS Life. She has also appeared on BBC’s IQ2 Debates, Q&A, The Project, Compass and is a regular on ABC’s The Drum and ABC Radio, where she is a host and occasional panellist.

“…the women were in awe! The take away quote for the day was ‘don’t just set the table make sure you have a seat at it’ you should patent that!! Cause I’m using it from now on!”

“I loved the way Tasneem peeled back the layers of stereotyping and perceptions that inhibit all of us. I appreciated the open, personal way in which she shared her experiences and knowledge” “Please continue your talks; they make difference” 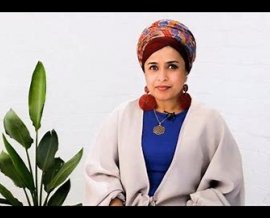