It’s been a huge few years for Rhys, his most recent solo show Seminal has had great success both in Australia and overseas taking out the Best International Show Award at the 2018 New Zealand International Comedy Festival, as well as being nominated for the Helpmann Awards’ Best Comedy Performer of 2018. This was after a tremendous 2017 in which Rhys picked up an ARIA nomination for Best Comedy Release for his filmed special ‘Live at Darlinghurst Theatre’. Rhys has also received a nomination for the illustrious Barry Award for his 2016 show ‘Bona Fide’.

Aside from gaining huge acclaim for his solo shows, Rhys publicly married lesbian and fellow comedian Zoe Coombs Marr at the 2016 Melbourne International Comedy Festival to highlight the importance of marriage equality in Australia. He was also the subject of an Archibald Prize finalist by Melissa Ritchie entitled ‘Rhys Smart Mouth’.

Rhys' face has been seen all over Australian TV – chatting candidly to then Prime Minister Malcolm Turnbull about red heads (and other things) on Ch10’s 'The Project', has been a panellist on 'Hughesy, We Have A Problem', and on the comedy show 'CRAM', as well as Ch9’s 'Talkin’ ‘Bout Your Generation'. He was co-host with Joel Creasey on ABCTV’s celebrated documentary 'GayCrashers', appeared on 'Dirty Laundry Live', and on Ch7’s 'Morning Show Style Squad' as well as 'Orange Is The New Brown'. Rhys has also performed stand up on Melbourne International Comedy Festival Oxfam Gala for the last 3 years running, ABC2’s Comedy Up Late, JFL Stand Up Series and The Sydney Comedy Festival Gala. Rhys has also hit TV screens overseas appearing on the New Zealand Panel Show 7 Days and early in 2018 filmed a comedy special in front of a live audience in London for the BBC.

Back home he is a fixture in the Australian comedy scene as a Sydney Comedy Store regular and headliner in clubs all over the country. 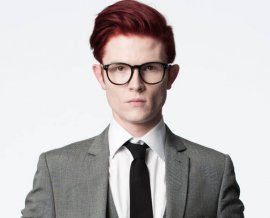