Jamila Rizvi is an author, presenter and political commentator. She is Editor-at-Large for the Nine Network's Future Women platform and hosts their podcast of the same name. She is also a regular commentator on 'The Project', 'Today', 'The Drum' and 'Q and A' and an occasional host on ABC ‘Melbourne Afternoons’.

In 2017, Jamila published her best-selling book 'Not Just Lucky, a career manifesto for millennial women. A year later it was long-listed for the Australian Book Industry Awards in 2018

In the same year, she released her second book ‘The Motherhood’, an anthology of letters about the first three months of life with a newborn. So far, Jamila has donated $15,000 in proceeds from 'The Motherhood' to CARE Australia, helping give women and girls in the developing world a better life.

In 2014, Jamila was named one of Cosmopolitan’s 30 Most Successful Women Under 30 and in 2015 and was listed as one of Australia’s 100 Women of Influence by the Australian Financial Review. In 2017, she was included in the Weekly Review’s Top Ten List of Young Rising Stars in Melbourne.

Before entering the media, Jamila worked in politics, acting as an advisor to both the Rudd and Gillard governments on the topics of employment, women, media, childcare and youth affairs. Jamila is a proud Ambassador for CARE Australia and a board member of the Melbourne's Writer's Festival.

Having travelled the nation speaking, Jamila is passionate about empowering individuals to become more confident in the workplace. With an easy-going, professional and infectious style, Jamila is also a popular MC, interviewer and host.

Jamila arrived with a profound understanding of our business and event objectives. She was warm and approachable, with a genuine interest and passion for the product, and this made her presence well received by influencers and vendors alike.

If you want to start a movement you need someone with energy and warmth to get the ball rolling. You need someone who is genuine, intelligent and kind. Jamila Rizvi takes the energy in the room, shape shifts it right along until you have a united community of leaders with fire in their belly. Jamila is a quite extraordinary and informed speaker. 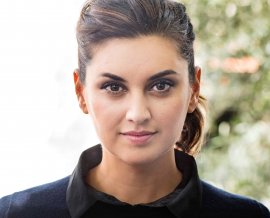