As one of Australia’s few female motoring journalists, Elise was a presenter on Network Ten’s motoring show WhichCar and has just signed on to host an upcoming classic car motoring show. Elise also wrote online motoring content for WhichCar.com.au and articles for other ARE Media publications including current monthly car columns in both Belle and House&Garden magazines.

Elise is a highly sought-after MC. She has hosted several automotive events, including the prestigious Australian Motoring Awards, the Porsche Taycan launch and the Ferrari Women’s lunch. In addition, Elise is the motoring contributor for Stella Women’s Car Insurance. Elise was previously a columnist for the The Herald Sun, filing regular opinion pieces and articles for the Weekend Magazine. Her feature writing can also be seen in various other magazines including Vogue.

Elise also lends her talents to radio as co-host on Nine Radio’s national program the House of Wellness, contributor to 3AW’s The Weekend Break, and Drive radio. Elise is the regular fill-in host on 3AW’s Afternoons.

Elise’s passion for journalism began in 1989 when she was elected editor of the Melbourne University newspaper Farrago. After finishing her Arts degree, Elise completed a Post Graduate Diploma in Journalism at RMIT. In 1993 she was spirited off to Tasmania where she secured her first job in television working as a reporter and newsreader for TasTV, Hobart. Elise's next move took her deep into the world of politics, moving to Canberra as a political correspondent in the Press Gallery for the Seven Network.

In 1998, Elise moved to Sydney and the realm of current affairs to work on Seven's Today Tonight. Here, Elise also hosted various programs including the late news and Sunrise.  In 2003 Elise was recruited by the Nine Network to work for A Current Affair based in Melbourne where she stayed for twelve years. During this time, she also presented Nine's evening news service Nightline.

When not shackled to her computer, you’ll find Elise out on the waves with her Mini Mal, indulging in her latest passion, surfing. Recently Elise was MC for the RipCurl Women’s launch. 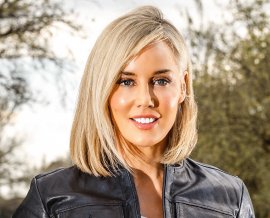