Andrew O’Keefe is host of the Seven Network’s hugely successful 'The Chase Australia', and co-anchor of the top-rating Weekend Sunrise. He is one of the nation’s most well-known and versatile performers and is recognised for his sharp wit, improvisational expertise, kinetic energy and genuine warmth. As a

In 2013, Andrew entertained audiences across the nation playing the role of King Herod in the stage show ‘Jesus Christ Superstar Arena Spectacular’.

Having studied Law, Andrew has also worked in commercial litigation for 5 years with top-tier Australian firm Allens Arthur Robinson. But his passion for entertainment overcame any thoughts of a straight and narrow career path.

Andrew’s media career began when he starred in the AFI nominated sketch comedy ‘Big Bite’ before becoming host on ‘Deal or No Deal’. In 2006, he became co-host of ‘Weekend Sunrise’. Andrew has also hosted live prime-time specials including the historic tri-network Tsunami Appeal: Reach Out to Asia, and the 2005 Logie Awards as well as numerous Telethons and Appeals.

Away from his career in entertainment, Andrew is a passionate advocate for social justice issues, and is an ambassador for the White Ribbon Foundation Australia, a nationwide not-for-profit organisation dedicated to eliminating all forms of violence against women. 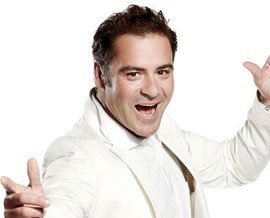