Dr. Alison Thompson is a full time humanitarian volunteer mass incident commander, running large refugee camps, field hospitals and resilience command centers in major made disasters around the world for the past 22 years. In 2020 Dr. Thompson was appointed as a United Nations Chaplain.

In 2010, she was awarded the 'Order of Australia', the highest civilian medal given by the Australian government for her service contributions to mankind.

In 2012, Thompson was appointed the first official Ambassador to the Haitian Ministry of Environment focusing on reforestation, clean water and sustainable energy. Thompson represented Haiti at the COP 22 2016 United Nations Climate change meetings in Marrakesh where she was later helped Haiti ratify the Paris Agreement in Parliament.

In 2015, Thompson gave the commencement speech at Loyola Chicago University and was honored with an Honorary ‘Doctorate of Letters’ in the ‘Humanities’.

She won the 2019 Governors Hurricane Service Agency award, the Hope Prize at TEDX Talk, the Dr. Martin Luther King 2019 humanitarian award, the 2019 Woman of Peace award, the Paul Harris award from Rotary International and numerous others.

Thompson was named the ‘Angel of Galle’ in Sri Lanka where she ran a busy field hospital and managed the rebuilding of a village and school after the 2004 tsunami. She founded CTEC- the first Tsunami Early-Warning Disaster Center in Sri Lanka and later opened a children’s learning center and tsunami museum.

Thompson flew to the Haiti after the 2010 earthquake with Sean Penn, ten doctors and managed a 75,000-person IDP camp and field hospital alongside General Simeon Trombitas, Operation United Response Task Force Haiti and the 82nd Airborne -who later honored her with the Commanders Award for Excellence.

Thompson was a key healthcare leader after the 2010 Haitian cholera outbreak and later founded a gender based violence rape clinic for women and girls in the dangerous Citi Soleil slums.

Thompson worked as a rescue paramedic in the epicenter of the Syrian refugee crisis for 3 years caring for refugees with hypothermia and war wounds. She developed a network of 30,000 Third Wave volunteers, who support and coordinate direct aid for the refugees and other disasters. Their programs include search and rescue/ healthcare, disaster preparedness, clean water and solar. Thompson has delivered over 100,000 innovative origami solar lights to refugee families along the dark shores of Greece and to the refugee camps of the Syrian borders.

Thompson has spearheaded large volunteer disaster response and aid campaigns during the Cat 5 hurricanes Matthew, Harvey, Irma, Maria, Florence Michael and Dorian. In Florida she co-founded the first Community Emergency Operations Center in the heart of the most vulnerable communities in Miami collaborating with 80 organizations to provide food, aid and preparing citizens with emergency response training for future disasters.

Covid-19 has Third Wave Volunteer first responders working in hospitals on the front lines nationwide across USA. Their “women in white N95 mask mission led by Thompson have sent out over ½ million N95 masks across USA (including the Navajo tribal nations), Puerto Rico, Bahamas, Peru and Haiti

Her award-winning documentary, The Third Wave, chronicles her volunteer experience in Sri Lanka after the 2004 tsunami and was screened at the 2008 Cannes film festival in a presidential jury screening presented by Sean Penn and Bono. She followed up with a book The Third Wave Volunteer Story. 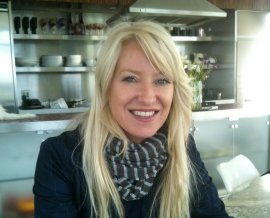