A highly respected journalist and author

As a highly respected journalist with a degree in history, Malcolm Gladwell is known for breaking through the mundane. Writing for the New Yorker, Malcolm brings to life what we all take for granted, from cookies and pasta sauce, to sneakers and sweaters. He visits obscure laboratories and informercial set kitchens to create engaging content which has made him famous.

Malcolm writes for The New York, as well as releasing his own bestselling publications, including ‘The Tipping Point’, ‘Blink’, ‘Outliers’, ‘What the Dog Saw’, and ‘David and Goliath’.

Co-founding Pushkin Industries, an audio content company, Malcolm diverges into all things overlooked and misunderstood. He also co-founded Broken Record, where he, alongside Rick Rubin, and Bruce Headlam, interviews musicians across all genres of the art.

Named in TIME Magazine’s Top 100 Most Influential People, Malcolm is flaunted as one of Foreign Policy’s Top Global Thinkers.

Through his speaking and written work, Malcolm created meaning of social and scientific phenomena. His keynotes are in high-demand and described as delicate, educational and intellectual. 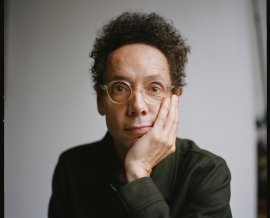