A visual fusion of new approaches to drumming, indigenous songs, sharp melodic breaks with strong influences from the shamanic traditions of Sumatra, Indonesia.

Blending sounds and music from across the globe, Japanese Drumming delivers a performance that is sure to captivate and entertain any audience.

Their usage of didgeridoos, percussive instruments, Western horns and Asian flutes combine to give an outstanding performance. Japanese Drumming utilise visuals to give a new approach to drumming which has strong influences from Indonesia, Japan, Africa and Australia. 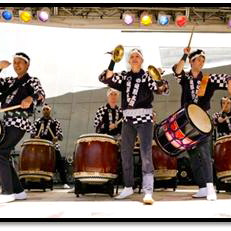