Hear from the mind behind NeuroNode that is changing lives

Known as the mind behind NeuroNode, Professor Peter Ford is revolutionising the lives of people with profound disabilities.

Beginning his career as a journalist, Peter worked with newspapers, magazines, radio and television in Australia and America. He covered an array of some of the biggest headline, including Space Shuttle missions at Kennedy Space Center, the Sydney Olympics, as well as covering the siege on Osama bin Laden at Tora Bora in Nangarhar Province.

During his time as a journalist, Peter began developing virtual robotics programs, as well as joined one of the first Rehabilitation R&D laboratories to develop new communications and control systems for people with severe disabilities

In 1999, Peter was invited to consult on a patient in Houston, so disabled in a car accident that he was unable to communicate in any form. Peter created software to re-task electromyograph data from a clinical EMG monitor to create a computer beep as a response, effectively making the man able to communicate.

Over the next three years, Peter worked on the system, eventually turning the beep into text sentences on a computer, before transforming to play pre-recorded words and phrases.

In 2012, Peter, with the help of technology writer Chris Griffith, created NeuroSwitch, which enables individuals with severe disabilities to drive robots around a controlled factory, as well as use computer-generated speech to communicate.

Working tirelessly to help others, Peter has transformed NeuroSwitch (now named NeuroNode) to enable individuals to control their electronics, wirelessly with neural signals through an adhesive patch on your skin.

As an author, Peter has published his book ‘The Keeper of Dreams’. 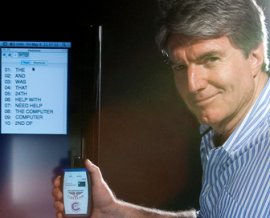