Whenever the announcer gives out the phone number for Karl Kruszelnicki's famous Science Talkback show on Triple J, on Thursday mornings - so many calls come in that the ABC switchboard crashes!

Karl's media career began in 1981, when he started presenting 'Great Moments In Science ' on Double J to pay his way through medical school. Since then, his media career has exploded from radio to include TV, books, newspapers, magazines, scripting, professional speaking, and of course, the Net. Karl made his TV debut in 1985 as the presenter of the first series of Quantum. Since 1986 he has reported science on the Midday Show, Good Morning Australia (including a full-time stint in 1991-2 as the TV Weatherman and science reporter), the Today Show and Channel 7's breakfast program Sunrise. In 2008 he completed a series for ABC TV with Adam Spencer called 'Sleek Geeks' - the pair teamed up again in 2010 to produce a second successful high-rating series for ABC 1 TV.

Karl has written (so far) 31 books, beginning with 'Great Moments In Science' in 1984, and includes such titles as 'It Ain't Necessarily So...'Bro' (2006), which was launched, quite literally, via rocket at Sydney's Bondi Beach (a world first).

November 2009 saw the simultaneous release of Karl's 28th book, 'Never Mind The BULLocks...Here's the Science', board game ('Fact OR Fishy'), and first ever music single, 'Get Fact'. In August 2010 Karl's 29th book, 'Dinosaurs Aren't Dead', was released. In November 2010, Karl's 30th book, 'Curious & Curiouser', was released into the adult non-fiction market and in October 2011, 'BRAIN FOOD'. His latest book 'Fifty Shades of Grey Matter' was released in late October 2012.

In 1996 Karl was invited by the United States Information Agency to be a Distinguished Foreign Guest in their International Visitor Program. Previous Alumni of this program include Julius Nyere, Anwar Sadat, Indira Ghandi and Margaret Thatcher. As part of this program he visited NORAD, Dryden Air Force Base and the Jet Propulsion Laboratory - and got to sit in the front seat of an SR-71 Blackbird.

In August 2000 Karl was one of first eight Australian Apple Masters to be announced (there are fewer than 100 in the entire world). The Apple Masters Program celebrates the achievements of people who are changing the world through their passion and vision, while inspiring new approaches to creative thinking.

In 2002, Dr Karl was honoured with the prestigious Ig Nobel prize awarded by Harvard University in the USA for his ground-breaking research into Belly Button Lint and why it is almost always blue.  In September 2003, Dr Karl was bestowed with the great honour of being named 'Australian Father of the Year'.  Dr Karl Kruszelnicki received the Member of the Order of Australia Award in the 2006 Australia Day Honours list. In 2007 the Australia Skeptics Society awarded Dr Karl the Australia Skeptic Of The Year Prize.  In March 2012, Dr Karl joined a rather exclusive list, when he was declared one of Australia's 100 National Living Treasures.

Karl has degrees in Physics and Maths, Biomedical Engineering, Medicine and Surgery and has worked as a physicist, tutor, film-maker, car mechanic, labourer, and as a medical doctor at the Kids' Hospital in Sydney.

Dr Karl is currently the Julius Sumner Miller Fellow at Sydney University, where his 'mission' is to spread the good word about science and its benefits.  His enthusiasm for science is totally infectious and no one is better able to convey the excitement and wonder of it all than Dr Karl Kruszelnicki.

Better Solutions: Trends in technology and behaviour
Throughout history, it has often been said that we live in interesting times, and every age, including the present, has its wonders, discoveries and traits. From the wheel to the automobile, aqueducts to army ducks, computers to telecommuters, human inventiveness and adaptability seems boundless. But what does the future hold? Will the sciences, both technological and human, give us a sustainable future, or will the worsening state of the planet and the social malaise of the people who live on it drive us to devolution? In this session we will explore some great moments in both science and society as a backdrop to examining the current and emerging trends, and indulge in a bit of speculation about what the future holds.
Critical Thinking: The last line of defence
Dr Karl will take you on trip into how easily we humans have been fooled (homeopathy, Great Fire of London, etc) and are still being fooled (visual illusions, Santa and SuperMan, Climate Denialism, the Safety of Alcohol for pregnant mothers, anti vaccination, etc). Luckily, there are a few pathways/concepts that we can use to find the Truth. But do not forget that the Flat Earthers have accused Dr Karl of being on the payrolls of both NASA (fake Moon landings?) and Big Globe (who want to keep selling Globes of the World).
Great Moments In Finance
Economics is called the dismal science, but it is not really science. The Nobel Prize in Economics is not actually a Nobel Prize. If economics was a real science, we could use it to avoid the booms and busts that continually plague our economy. Dr Karl will give his thoughts on economics, and other witty science related subjects.
Great Moments In Science
Great Moments in Science celebrate all sides of science; from sublime moments of deep thought to the most arcane and bizarre research imaginable. The universe is a strange and wonderful place and, in his Great Moments, Karl has scaled the highest peaks as well as turned over the pebbles to see what is underneath.
Sustainability
Karl did his first story on the Greenhouse Effect on radio in 1981, in his first book in 1985, and on TV on the Midday Show with Ray Martin in 1986. His presentation on Greenhouse and Sustainability builds on this long experience. It points out that (surprisingly) the normal climate on this planet while we humans have been here is an ice age, and explains the deep interconnectedness of the climate to human achievements, the oil industry, and agriculture. It also deals with the myth that most scientists do not support the hypothesis of Global Warming. 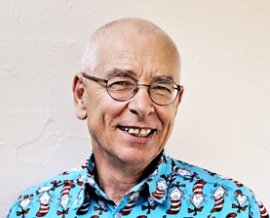