An internationally acclaimed tribute to the one and only Kylie Minogue

The Australian Kylie Show is an internationally acclaimed tribute to the one and only Kylie Minogue. A dream for all Kylie fans, Angie embraces the songstress in a show that is guaranteed to be the closest thing to the real deal.

Every aspect of the performance has been matched to be like a real Kylie act including the costumes, choreography, dances, music and even Kylie herself.

The show features songs from Kylies careers, so whether you’re a diehard fan or not, you are sure to know all the songs (and maybe even the lyrics!).

Kylie’s double is played by Angie Hilton, who has played a Kylie double on television before. She is a talented and experienced performer whose vocals are almost identical to Kylie’s and whose looks are impeccably similar. Angie has been a recording artist herself at BMG Records where she was a lead singer with pop group Sirens.

An impressive and astonishing show, The Australia Kylie Show will make you believe you are attending a Kylie Minogue performance. 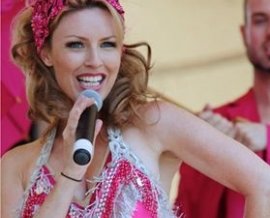