An entertaining look at science

Ruben Meerman is a surfer with a physics degree known to a generation of Aussie kids and parents as the ABC's Surfing Scientist. He has presented science experiments and stories on ABC television programs since 2004 and appeared on Catalyst, Sleek Geeks, Studio 3 and Roller Coaster. In 2012, Ruben became the first ever resident scientist on Play School.

Ruben has written four children's science books, visited more than 1500 Australian primary and high schools since 1995, taught science education at Griffith University and he continues to produce and publish science experiments and content for ABC Science Online. He has MC'd the Prime Minister's Prizes for Science, the Western Australian Science Prizes, the NSW Green Globe Awards and is a regular after dinner speaker at corporate events and conferences.

In 2013, Ruben's career took an unexpected turn to the science of weight loss when, while losing 16 kilograms and wondering where the missing mass was going, he stumbled onto widespread and alarming misconceptions about weight loss among doctors, dietitians, personal trainers, pharmacists, teachers and the general public alike. His novel approach to this well established biochemistry was published in the BMJ (British Medical Journal) on 16 December 2014. By tracing the metabolic fate of all the atoms in an average molecule of human fat, Ruben revealed that 84% of the mass in fat is exhaled during weight loss.

As a result of this groundbreaking work, Ruben is now a PhD candidate in the School of Biotechnology and Biomolecular Sciences at UNSW under the supervision of his BMJ co-author and biochemist Professor Andrew Brown. One of the duo's main objectives is to change the way metabolism is taught and presented in medical and biochemistry textbooks and to correct the widespread misconceptions among health practitioners and the general public. Ruben presents guest lectures on fat metabolism for UNSW's second year Advanced Biochemistry and third year Human Biochemistry students.

Ruben's family immigrated to Australia in 1980 when he was nine years old. After completing his schooling in Bundaberg, he studied physics at the Queensland University of Technology in Brisbane. His scientific career began in the optical coatings laboratory at Laserdyne Pty Ltd, a small Gold Coast engineering company that designs and manufactures laser range finders and electro-optical systems to the Australian Defense Force.

After two years in the lab, Ruben toured regional Australia with the Shell Questacon Science Circus while completing a Graduate Diploma in Science Communication at the Australian National University. His media career took off two years later when, while teaching science education at Griffith University, Ruben conceived and produced a hands-on forensic science competition called "Who Stole the Minister's Malibu?" and later "The Planet Science Whodunnit?" for schools that attracted more than half a million participants across Australia and the United Kingdom.

Ruben's passion for numeracy, scientific literacy and public education has developed over 20 years during which he has visited more than 1500 Australian public and private schools. 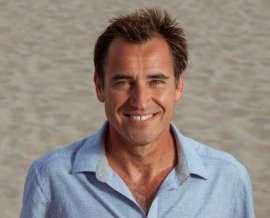