With an extensive repertoire of songs from all decades

As one of Melbourne’s best cover acts, Jamieson prides themselves on adapting their music to suit any audience. With a contagious energy and unmatched stage presence, Jamieson are able to perform at any event.

Jamieson consists of Bec Jamieson and Alex Weybury as the band’s leading vocals, with their performances covering music from the 1960’s up to current top 40 hits. The band are able to perform as a 5-piece line up as well as a 7-piece band.

Bec has been a featured backup vocalist for Vanessa Amorosi and Kate Ceberano, as well as sung the Australian National Anthem for Cricket Australia in front of half a billion viewers.

Alex’s musical abilities are apparent in the way he plays piano, guitar, saxophone, violin and melodica as well as male vocals. 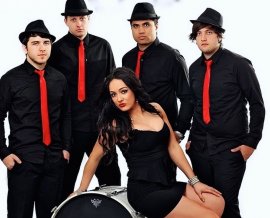