Sarah Jessica Parker is an award-winning actor, producer and businesswoman who has garnered four Golden Globe Awards, three Screen Actors Guild Awards, and two Emmy Awards. Parker currently stars on HBO’s television series Divorce, in which she also serves as an executive producer. Parker was nominated for a Golden Globe for her role in the series.

Parker starred as Carrie Bradshaw on the HBO television series Sex and the City (1998-2004) and served as an executive producer. Parker reprised her role and served as a producer for the screen adaptation of the hit series with the theatrical release of Sex and the City and Sex and the City 2. Past film credits include: I Don't Know How She Does It, Smart People, Failure to Launch, The Family Stone, State and Main, Mars Attacks!, Ed Wood, The First Wives Club, Miami Rhapsody, and Honeymoon in Vegas.

She has worked in the theatre, on and off Broadway, since 1976 when she debuted on Broadway in The Innocents directed by Harold Pinter. Other Broadway credits include: the title role in Annie, How to Succeed in Business Without Really Trying, and Once Upon a Mattress. Off-Broadway credits include: the original production of To Gillian on Her 37th Birthday and The Commons of Pensacola.

Sarah Jessica recently launched SJP for Hogarth which publishes high-quality works of fiction by both established writers and distinctive emerging voices with critical and commercial promise. In this new role, Parker acquires and curates works of fiction that reflect her own taste as a reader. She is directly involved in the editorial and publishing process for each book issued under her imprint, with her vision providing the editorial foundation for each publication. SJP for Hogarth’s first acquisition was “A Place for Us,” a debut novel by Fatima Farheen Mirza, which became an instant New York Times bestseller upon publication in June 2018.

In 2014, Parker launched her namesake label, SJP, which is carried by Amazon Fashion, Bloomingdales, Neiman Marcus online, Saks.com, and Zappos Luxury, as well as various other boutiques and international retailers.  Parker designed this collection of shoes, handbags and accessories in association with George Malkemus III. SJP now has two permanent stand-alone stores, which a third opening in New York City's Seaport District this fall. 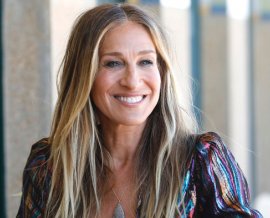