John has been honored twice with Academy Award nominations, the second for his riveting portrayal of a philosophical hit-man in Quentin Tarantino’s PULP FICTION. He also received BAFTA and Golden Globe nominations for this highly acclaimed role and was named Best Actor by the Los Angeles Film Critics Association, among other distinguished awards.

John has starred in a number of monumental films, earning his first Oscar and Golden Globe nominations for his role in the blockbuster SATURDAY NIGHT FEVER, which launched the disco phenomenon in the 1970s. He went on to star in the big- screen version of the long-running musical GREASE and the wildly successful URBAN COWBOY, which also influenced trends in popular culture. Additional film credits include the Brian DePalma thrillers CARRIE and BLOWOUT, as well as Amy Heckerling’s hit comedy LOOK WHO’S TALKING and Nora Ephron’s comic hit MICHAEL. Travolta starred in PHENOMENON and took an equally distinctive turn as an action star in John Woo’s top-grossing BROKEN ARROW. He also starred in the classic FACE/OFF opposite Nicolas Cage, and THE GENERAL’S DAUGHTER, co-starring Madeline Stowe. In 2005, Travolta reprised the role of ultra- cool Chili Palmer in the GET SHORTY sequel BE COOL. In addition, he starred opposite Scarlett Johansson in the critically acclaimed independent feature film A LOVE SONG FOR BOBBY LONG, which was screened at the Venice Film Festival, where both Travolta and the films won rave reviews.

John currently holds the jet licenses and type ratings for the Boeing 747 (Australian cert) and Boeing 707. He also holds licenses in Gulfstream, Challenger, Hawker, Falcon, Lear, Citation jets as well as the de Havilland Vampire and Canadair CL-41 Tutor/Tebaun military jets. John has received 2 prestigious aviation awards: in 2003 the American Institute of Aeronautics and Astronautics Foundation Award for Excellence for his efforts to promote commercial flying, and in 2007 The Living Legends Ambassador of Aviation award.

Travolta is the Qantas Airways Global Goodwill “Ambassador- at-Large” and piloted the original Qantas 707 during “Spirit of Friendship” global tour in July/August 2002.

John flew the 707 to New Orleans after the 2005 hurricane disaster bringing food and medical supplies, and in 2010, again flew the 707, this time to Haiti after the earthquake, carrying supplies, doctors and volunteers. 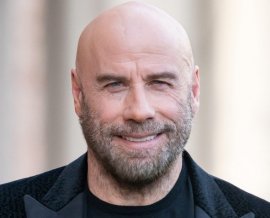